Layla Saad's Me and White Supremacy: Combat Racism, Change the World, and Become a Good Ancestor 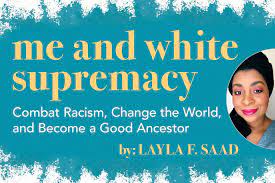 One of the most common questions I hear from my white friends and colleagues after they first attend an in-depth anti-racism workshop or after they witness a particularly egregious incident of racial violence on the news is “What can I do???”  For that I am grateful, since if they were to ask their BIPOC friends or colleagues the same question, they could expect to be met with rolled eyes and looks of disbelief, as if there’s any one thing that we white people can do to dismantle the entrenched systems of racial advantage and oppression that are so deeply embedded in our nation’s history.

Typically, the shame, guilt, and sheer cognitive overload of this newly found awareness can be both shocking and overwhelming when we must all of a sudden name ourselves racially as “white” and as Layla Saad reminds us, this absence of even having to know is the very essence of what white privilege is.  In fact, it is white ignorance and indifference to the suffering of our BIPOC friends, neighbors, and colleagues that is even more chilling and devastating than any intentional violence we may perpetrate (or that is perpetrated on our behalf) against them as John Black reflects in his recent opinion piece,  “The look in Derek Chauvin’s eyes was something worse than hate” (CNN, April 24, 2021). In reading that piece, I am reminded of the first time I watched Raoul Peck’s masterful short film I Am Not Your Negro in which James Baldwin in his own words holds a mirror up to the moral bankruptcy and inhumanity of white culture.

The good news is that if you are a white person or a person with any measure of white privilege, there is one thing you can do that will make a difference - read Layla Saad’s book Me and White Supremacy: Combat Racism, Change the World, and Become a Good Ancestor! There’s just one caveat though, because Me and White Supremacy is not just a book that you read, it’s a book that you do.  Growing out of her phenomenally successful 28-day Instagram challenge created in response to the 2017 Unite the Right rally in Charlottesville, Saad’s book is organized into 28 short chapters designed to be carefully chewed and digested over the course of four weeks (or more).

Week 1 focuses on the “basics” of white supremacy such white privilege, white fragility, and white superiority while Week 2 describes anti-blackness, racial stereotypes, and cultural appropriation.  Week 3 shines a light on the pitfalls of white saviorism, tokenism, and “optical allyship,” and finally, Week 4 explores power, relationships, and commitments.  Consisting of a few pages of text followed by anywhere from one to six questions, each chapter provides a short lesson with prompts designed to inspire introspection and reflection while deepening understanding and self-awareness.  Journaling is essential to the work which can be done individually or as part of a discussion group following the recommended Circle Way process developed by Christina Baldwin and Ann Linnea.

For an inspiring introduction to the journey of self-discovery laid out in her book, watch one of these compelling podcasts or interviews with Layla Saad:  Inside #MeAndWhiteSupremacy: Week1 (20 min), Book Launch Event at the Strand (60 min), Layla Saad Talking at Women of the World (54 min), or The Woke Lab: Layla Saad – Defying White Supremacy to Find True Freedom with Justin Michael Williams (90 min).

Are you a person with white privilege who genuinely wants to know what you can do? If so, start with yourself.  READ Layla Saad’s book, LISTEN to her podcasts, REFLECT on her thoughtful questions, and RESPOND to her call to change the world.  And don’t forget to invite your family, friends, neighbors, and colleagues on this journey with you.  Starting now!

Please check your e-mail for a link to activate your account.